Mabel Plumb was born in Cotterhill Lane in the village, on 11th December 1897 to parents Arthur – a coal miner, and his wife Matilda.

Little is known of Mabel’s early life in Brimington, but in 1913 at the age of 15 she moved to Leicestershire to work in service as a cook for a Mrs Jessie Victoria Harding at Hume House in Loughborough-  for the princely sum of £24 per year.

Below - Mabels enrolment in the WAAC.... 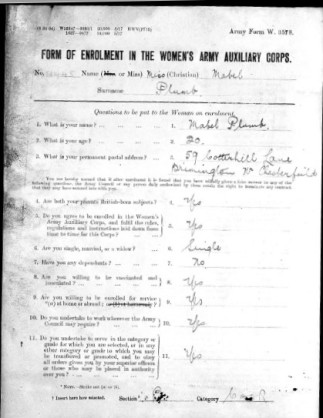 In September 1917 Mabel enlisted in the Women's Army Auxiliary Corps which was later named Queen Mary's Army Auxiliary Corps. Over 57,000 women served between January 1917 and November 1918. On 31 March 1917 women in the WAAC were first sent to the battlefields in France -  numbering just 14 cooks and waitresses.

Mabel was initially assigned to the 2nd Artist Rifles OTC as a cook before she was shipped to France as: ‘4948 Plumb M’ to work at QMAAC headquarters at Wimereux  - which was a massive hospital centre for the British forces sick and wounded. 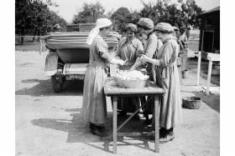 Her duties were to prepare food, cook and serve the meals.   For which she got paid around 24 shillings a week – but half of that would be deducted for food.  Uniforms and accommodation were free. 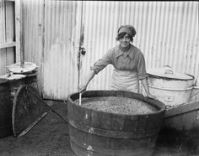 She was still serving in France in 1919 but her employer Mrs Harding in Loughborough was taken seriously ill and Mabel was granted special unpaid leave to return home and take care of her employer.  Mabel was finally demobbed in October 1919 - and returned home to Cotterhill Lane a short time later.

Mabel married 3 times -  first to  Mr James Henry Miers in 1919 in Chesterfield – that marriage ended quickly and she married again in 1925 to Harold Woolley, and the newlyweds went to live in Brearley Avenue in New Whittington, Chesterfield. Her final marriage in 1964 was short lived – her husband James E Evers, died 2 years later in 1966.

She died in September 1980 after a long and eventful life.

The role these women played was crucial to the war effort.  The endless stream of medical supplies and comforts for the soldiers, destined for the front never wavered throughout the war.  The ward-maids, cooks and cleaners who left their families to work away in hospitals and factories at home and abroad undoubtedly proved the final catalyst for women to finally be given the vote - after decades of struggle.

When the war ended in November 1918 - 8.4 million women were granted the right to vote

However, women would have to wait until 1928 to be granted the vote on equal terms with British men. This was brought by the Representation of the People Act, which stated all women over the age of 21 could vote.

Statistics>>
Return to top of Page