DECEMBER 1918
Over a month after the signing of the Armistice BRIMINGTON LOSES TWO MORE SOLDIERS -WHO FINALLY SUCCOMB TO THEIR WOUNDS -   one is buried in France the other in Brimington cemetery. And even as late as 1921   Private Fred Nadin (brother of Edgar) finally died of his wounds and he too is laid to rest in Brimington Cemetery. Fred’s name does not appear on the Memorial Gates 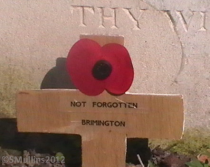 Maps >>
Return to top of Page