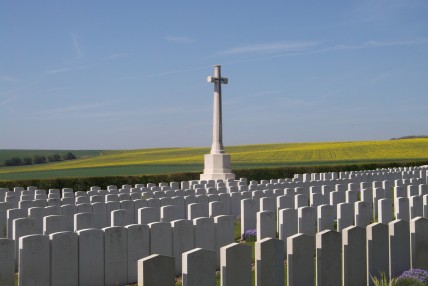 Ovillers Cemetery, in the heart of the Somme battlefield

July 2016
Our Remembrance 0n The Somme

We rose early and left our hotel in the heart of the Somme battlefield at around 7am and headed towards Mametz - a village in the southern sector of the British line and where many Brimington men were positioned during the battle.

Security was very tight - members of the Royal Family and high-ranking European politicians were to attend the "Somme 100” Commemoration service at Thiepval Memorial later that morning.


And so many of the normal routes through the areas of battle were cordoned off and manned by teams of gendarmerie to prevent people entering the tightly controlled ‘no-go zone’.

Luckily we knew the area very well and managed to find a detour through the myriad of back lanes and farm tracks which took us as close as we could get to our destination.

By 7.20am we were out of the car and standing atop of a small incline – which looked down on the small French village and  the 'killing fields" where exactly 100 years before- tens of thousands of young men waited for their officers shrill whistles to signal 'zero hour' and that they were "going over the top".

Too many of those who climbed out of the trenches on that warm summers morning were lost in just a few moments - Brimington men amongst them.

At precisely 7.28am we blew our whistles in a symbolic gesture of remembrance and recalled the young men of Brimington who were lost, wounded and maimed during the 141 days of that terrible battle.

After more than a decade of researching our village soldiers we knew we were standing close to where Private Albert Cherry (Station Road) was killed on the 14th July and where Private Ernie Jervis (Victoria Street) had his leg blown off and died shortly afterwards on the 19th July.

In Mametz Wood just beyond the village - Brimington men Private Frank Cooper (Cotterhill Lane) and his close friend Private Herbert Smith (Southmoor Road) were killed within 3 days of each other - Herbert has no known grave and Frank is buried a few miles away at Mericourt.

Just four miles further on at the infamous Trones Wood, Private Alfred Ireland (Burnell Street) was killed in ferocious hand-to-hand fighting with the Germans - he too has no known grave - his remains may still lay in the wood with thousands of others.

A short distance further on we looked towards the village of Fricourt - close to where 21-year-old  Private Harry Marshall (Coronation Road) was grievously wounded on 1st July - he died in hospital 6 days later and is buried in Boulogne .  And then - not visible from where we were standing - in what the Tommie’s affectionately called "Mash Valley" we thought of Private Ernest Crozier (Tapton Cottage) who also lost his life on 1st July at Authuille Wood and he is buried in the aptly named 'Blighty Valley Cemetery'.

We recalled Brimington Common soldier Private Water Barlow killed at Mouquet Farm on the Thiepval Ridge in September - his body was never found.

Beyond in the sweeping valley behind us lay High Wood and the village of Longueval - where in August 1916 Private John Keeling (Cotterhill Lane) was killed by a snipers bullet.  Over the brow to our right and out of sight lay the village of Bazentin where Private Arthur Turner (Hays Yard) was lost on July 14th - his body was never found - and Private George Pratt (Queen Street) was carried from the battlefield there - but later died of his dreadful wounds.  Sapper James Chapman (King Street) was also killed in the Bazentin sector a few weeks later in August 1916 - he has no known grave.

Some 12 miles away at the far northern section of the British line at Gommecourt - we remembered Corporal Luther Johnson (Burnell Street) who was one of the first Brimington men to be killed on the 1st July 1916 - and like so many others he too has no known grave.  We have visited that area - many times -  where he climbed out of his trench on that fateful day and met his death so quickly.

We said a prayer for all of our men as we left the hillside shortly afterwards.

Later we attended the Somme Centennial Commemorations at Thiepval Memorial where at the end of the moving ceremony we were invited to lay our Brimington wreath at the Stone of Remembrance.

Passchendaele>>
Return to top of Page