The battle that came to symbolise the true horror of warfare in The Great War.  This one battle seemed to epitomise the total futility of trench warfare and the ineptitude of the British Army High Command

*  By the time the offensive ended in November the British had suffered around 420,000 casualties 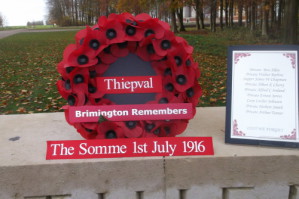 8   Have no known grave & are remembered on the Thiepval Memorial

5   Buried in various Commonwealth war cemeteries in the Somme area

Others suffered life-changing injuries and many more were wounded & maimed

" ...my Corporal I saw go down and the men behind him would have suffered the same fate to a man"   ( Private Walter Turner in a note home )

(Extract from report in the Derbyshire Courier – Aug 1916)

…"I regret to inform you that your son was killed in action at Bazentin Wood on July 14th.  One consolation, his death was perfectly instantaneous and painless.   He was hit in the heart by a shrapnel bullet"
(Extract from report in the Derbyshire Courier – Aug 1916)

Death of Private Ernest Jervis (19th July)
"... the enemy dropped a big shell smack in the trench.  It knocked two out, missed one
altogether and hit me and Ernie Jervis.  He shouted to me he said -'it had blown his leg off and I don’t know where he is"
(Extract from report in the Derbyshire Courier – July 1916)

“…He was one of a party told go off wiring in front of our trench and the Germans came out and bombed them –  your husband getting killed instantly.  He never suffered any pain and he died straight away.   George was a jolly good soldier, true and steady.”
(Extract from report in the Derbyshire Courier – Sept 1916)

Many Brimington soldiers survived the Battle of the Somme, but suffered life-changing injuries

Serious shrapnel wounds to hip, back and right arm -  19th July and was hospitalised for several months. He never regained full use of his arm and suffered periods of severe shell-shock

Guardsman Sims Nadin (Victoria Street)
Severely wounded in back and stomach - 15th July 1916.  Bed ridden for many years after the war.  It took him several long and painful years to recover

Private George Pacey – Sherwoods (Queen Street)
29th July -Machine gun wound in left leg and bullet to his lung which was lodged there and could not be removed.  He lost two fingers from his right hand & suffered severe shell-shock.

Gunner Jack Cocksedge – MGC (Victoria Street)
20th Sept – severely wounded by shrapnel in the face, shoulder and lower back -  during heavy shelling near his trench. His face was left badly scared and he lost the sight of one eye‘

QUOTES & STORIES
From the lads who were there
Taken from letters, personal accounts and newspaper articles

“... There was nowhere to hide, so we kept going desperate to find a shell-hole for shelter….”
(Private J Richardson – Cemetery Terrace 12th July 1916)

“I fear I have lost many or my comrades and friends, they have not been heard of since the first day”
(Private A Cantrell, Brimington Common – extract  from a letter home July 1916)

“ ..You are not to worry but I have gunshot wounds to my face, eye, neck and cheek…’
(Private J Brown to his sister in Princess Street- written by Nurse Healy on his behalf -July 1916)

" The Germans simply swept the earth with bullets, but we had to keep on going and then I got bowled over with a bullet that must have had my name on…”  (Corporal J. R. Whitehead (KOYLI) in a letter sent to his wife in Brimington )

In the Somme area there are over 410 Commonwealth Cemeteries

We’ve visited almost 300 over of the years.

Below Just a few of the Cemeteries on the Somme 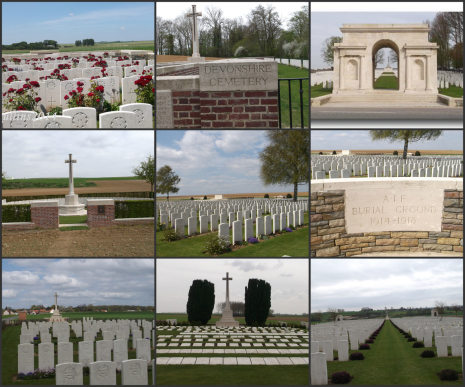 " ..there is some corner of a foreign field, that is for ever England “

(from ‘The Soldier’ by Rupert Brooke)

Our Somme Remembrance>>
Return to top of Page