The Men Who Came Home

It is difficult to calculate with any accuracy just how many men from Brimington signed up to fight in the Great War.  The official 'Electoral list 1914-1918' for the village lists less than 300 men away on Military Service during that period,  yet some figures show around 750+ enlistments from the village.

We know that many British army regiments recruited constantly in Brimington and the area to entice its young men to 'take the Kings shilling'  throughout the war. So there were many men who are deemed to  be from Brimington, but had never actually lived in the village – just enlisted there.

So the list below is therefore just a "snap-shot"  of some of the men who returned from the war – and who had resided in Brimington at some time. 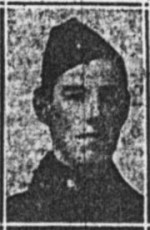 Fred Smith was one of the village men who went to war and came back. He was born in Cotterhill Lane in 1896 to George and Annie Smith. He was a miner at Oxcroft Colliery – before and after the war.

He joined the Sherwood Foresters in November 1915 and on 1st July 1916 on the first day of the battle of the Somme; he was shot in the jaw. A bullet entered one side of his face, smashed his teeth and lodged in his other cheek. He was taken from the field and was eventually transported to Rouen Hospital, in France where he remained unconscious until the 4th July. He wrote to his mother from there and shortly afterwards he was shipped home.

He was my godfather and I saw at first hand the affect his war had on him. A quiet reserved man, he would spend many hours alone, and never spoke of the war. He worked as a miner until his retirement.

As we started this pilgrimage I often thought of him and I still do, for he was an exceptional gentle man with a deep rooted sense of honour and dignity despite the horrors he endured

All six sons of  Henry & Jane Hill  of Church Street, Brimington fought in the Great War - all were volunteers and each of them had a different experience.    Five came home. ---

William Hill  ( born 1883) was a miner and married his American wife Sarah in 1908. He  joined the Sherwood Foresters in 1915 and served with the regiment throughout the war and saw action in Belgium and in France.  He survived the war and had three children. He died in  Brimington

Thomas Hill ( born 1885) was already a soldier when war broke out – serving the Sherwoods.  He married his wife Sarah in spring 1914,  was captured by the Germans in October 1914 and remained a prisoner of war throughout the next four years and wasn’t released until after the armistice was signed. Unfortunately during his absence his wife had given birth to a child by another man.  Thomas divorced in Dec 1919, and remained in the Brimington area for many years.

Ernest Hill  (born 1893)  was a Corporal with the 6th Bn Sherwoods (Territorial’s). He went out to Belgium in early 1915 and was one of the first from his battalion to be wounded -  he received a shrapnel wound to the foot.  It is reported that Hill      '....  with characteristic pluck of a Derbyshire soldier bandaged his wound and stayed at his post day and night until he was absolutely compelled to give as septic poisoning  had set it’    He was shipped back to Derby Hospital for treatment and eventually returned to his battalion .  He survived the war and died in Chesterfield in 1960.

Wilfred Hill  (born 1896)  joined the 7th Leicester in early 1915 along side a number of other Brimington men.- many who perished.  He appeared to come through the conflict unscathed. without a single injury.  He probably died in Chesterfield around 1950.

Job Hill  (born 1888)  He joined the Sherwood Foresters  in early 1915  and won the Military Medal in  April 1917 and suffered a gunshot wound to his back and right thigh.   He wrote to his wife Isabella from a military hospital in Oxford where he was recovering from his wounds  to tell her how he had won the medal-  ‘. .....we made an attack in the early morning and were making another about dinner time.  A tank went into action with us but was badly hit and set on fire in no mans land  I and a sergeant at once went to the rescue and I am pleased to say I succeed in getting one man out and carried him to safety under heavy fire.  So you see it wasn’t much and I only did my duty’.    He survived the war and lived for many years in Coronation Road.  He died in Brimington in 1958.

The one brother who did not survive was L/Corp Henry Rodgers -  the eldest 'Hill' brother who used the 'Rodgers' name for personal family reasons.  He died of his wounds on 17th July 1917.  His story is told on our 'Fallen' pages

(Our thanks to Peter Rodgers for the Hill brothers photographs)