They shall grow not old, as we that are left grow old,
Age shall not weary them, nor the years condemn.
At the going down of the sun and in the morning,
We will remember them.

Below are the faces of a few of the young men from Brimington who died in
the Great War.

Most photographs are copied from ‘The Derbyshire Times’ - a few have been sent to us from relatives over the years.

But these are the miners, the clerks, the greengrocers etc  who joined up to fight the Kaiser and  lost their lives.

The following pages are simply brief details of their lives – and their subsequent deaths.

Please click on the Links on the side bar (left)  to read  each soldiers story. 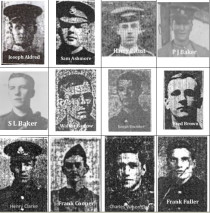 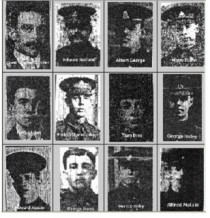 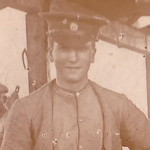 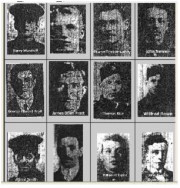 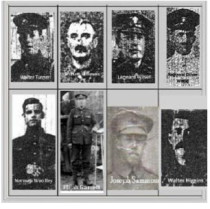 Despite the many years spent researching Brimington’s soldiers and the mass of data and information we’ve gathered, there are still 5 names from the Memorial who are proving difficult to verify.  Some we can find the mans possible connection to the village, but cannot match his military details .

So  we’ll keep searching until we can prove without  doubt who the men were...

The ones still 'missing'  :

John  Bradshaw
There are 4 Bradshaws remembered on the Memorial - three have been proven to be brothers.  And 57  'J Bradshaws' are listed on the CWGC.  Now after years of trying I’m close to identifying that final  John Bradshaw.  And his details will be added to this website as soon as they can be verified.

William Davies
There are over 400 'W Davies' listed on CWGC.  And Ive tried various combinations of the spelling.  There were Davies living in Brimington in 1901 and 1911 and Ive pinpointed one in particular,  who was a boarder at Pondwell Corner, Brimington, before moving to Calow.  But I still need to substantiate a soldier who fits that criteria.

James Dawson
Again this soldiers identity remains a mystery.   There was a Dawson family living in Brimington in 1911 with a son  in the right age range to enlist at the start of the war.  But there are too many possibilities to pinpoint with any accuracy, and none of the 146  'J Dawson’s' listed on the CWGC give a clue to any connection with Brimington -  only  one to Staveley.

J Taylor
Out of over a 1000  'J Taylor' listed as killed in the Great War,  we have narrowed the search down to a handful with a tenuous  connection to this area.  One in particular seems likely as his wife was born in Brimington - but without the hard evidence of complete army records for this soldier, naming him is still 'work in progress'

William T.B.  Taylor
We cannot find a soldier with these full initials -  or any civilian information which might point us to the right man.  There were a couple of  Taylors living in the area in 1911 who are in the right age group.  But once again we are still working on  substantiating the evidence. 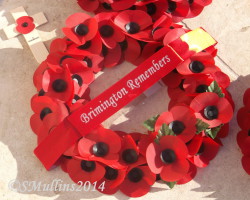