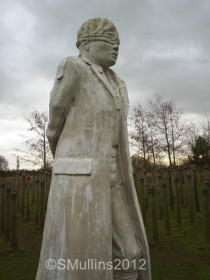 Shot at Dawn Memorial at the National Arboretum, Staffordshire
Commemorating the 306 British and Commonwealth soldiers executed after court-martial for cowardice  and desertion during WW1

From the 'Derbyshire Times'

Arthur Briggs joined the 9th Bn Sherwood Foresters in 1915 and saw action almost from the start.  By 1916 his battalion was caught up in the futile campaign in Gallipoli and it was there that Arthur succumbed to dysentery and was shipped home to convalesce.  At the end of that year he was sent back to France, and left behind an 18 year old pregnant girlfriend and a mother who was totally against any marriage to the girl.

Arthur had to wait until the beginning of 1918 to be allowed home on leave to finally get married. He had been granted 7 days leave but at the end of the furlough he did not return to his unit, instead he left for Scotland with his wife and child.

Whist Arthur was ‘absent without leave’ in Scotland he was informed by his mother that his youngest brother Sam had been killed in action - aged just 20. Then only two months later his father Henry died on 26th May 1918. It was only a short time later that Arthur was found and arrested in Edinburgh by military police. Apparently he told the arresting officer 'I was going to give myself up tomorrow!’

He was immediately taken back to France to attend his Court Marshal. He was defended by an officer from 9th Battalion who was a solicitor in civilian life and Arthur admitted to one of the charges - that he had been an ‘overstayer’ on previous occasions, but he did not admit desertion.

But the fact that he had disposed of his kit and his uniform, was damning evidence. And army witness statements seemed to suggest he wasn’t up to much as a soldier. So despite his plea to the contrary the Court Martial found that he was guilty of desertion and he was sentenced to death.

The following morning 21801 Private Arthur Briggs aged 27 was taken out and shot - reports say the time was between 3 am & 4am at Bracquemont in France on 19th July 1918, and he was buried in Hersin Communal Cemetery Extension. 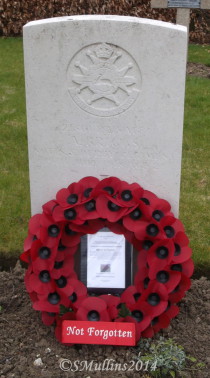 It has been reported - although never substantiated - that Arthur’s firing squad was made up of comrades from his own regiment.
It is known that at many ‘shot at dawn’ executions comrades of the condemned man were made to watch, or parade past the body -supposedly as a deterrent.

Arthurs story is tragic,  his mother Harriet’s just as terrible -at least 4 of her sons joined the army - 3 were killed ( son Fred was killed in action 1st Sept 1918 aged 25) and her husband Henry died at home and all in the space of less than 6 months.

We have visited Arthurs grave in Hersin Cemetery many times and on each visit we lay a plaque or a wreath  on behalf of Brimington.

Private Briggs grave in Hersin Cemetery - with our wreath & plaque 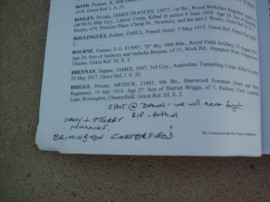 We also left our own thoughts of his tragic and unnecessary death in the cemetery  book there. which shows our own views that Arthur Briggs was 'murdered' by the British High Command. 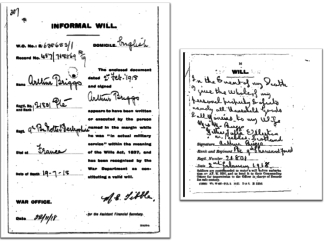 ' the whole of my personal property & effects, namely all household goods and all monies to my wife........'

We've visited Arthurs grave many times over the years leaving a wreath or a plaque each time we go.