According to the International Committee of the Red Cross (ICRC) - during the First World War  some  8 million soldiers fighting on the front were taken prisoner and interned in camps,  of whom around 2,400,000 were held by Germany.

In Germany -as in Britain-  meticulous records were kept by the The Kriegsministerium (Ministry of War) in Berlin.  So the date and place of capture, death and or release were recorded in detail.  Together with any personal information about the captured soldier.

Thanks to newly released information we have been enable  to discover more details about  four Brimington soldiers who were prisoners of the Germans.

Three men died in captivity,  and one made it back to Brimington, but died shortly after as a result of the injuries and illness he sustained whilst a prisoner of war.

Private George Insley   was reported missing on 27th March 1918 during the first week of the German Spring offensive  - the ‘Kaiserschlacht’.

In spite of stubborn resistance by the British forces the Germans managed to enter Aveluy Wood, near the River Ancre  during the night of the 26th March 1918 and it was during this encounter with the enemy that Private Insley - along with more than 200 of his comrades was taken prisoner.

He and his fellow POW's were taken north to an area around Mons in Belgium and it was here in October 1918 that Private George Insley died of influenza.  According to German records he died on 18th October but the CWGC has the date of death as 26th.

The soldier was initially buried in Havre Old Communal Cemetery, to the east of Mons.  But later he was re -interred by the CWGC in St Symphorien Cemetery. 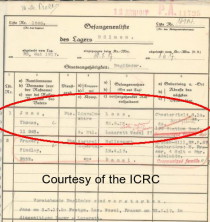 Private Inns was taken prisoner within hours of his arrival at the notoriously bloody battlefield of Loos  on the 25th September 1915.   His  battalion  suffered heavy casualties and  the Germans took many prisoners.

Private Inns was eventually taken to the infamous Wesel POW camp in Germany.  Reports of the prison camp were not favourable.   Rumours of disease , malnutrition and forced labour were rife. Private Inns died in the camp of ‘disease’   on the 3rd May 1917. 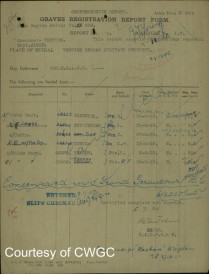 The parents of Sapper Charles Unwin  received a letter on 10th August 1918 from their son  stating that he was ‘...was a prisoner of war in a German camp ‘

This was the first  communication they’d  had from him since April that year.

The Brimington soldiers death  however is recorded  as 15th June 1918 -  two months before his parents received the letter.  There are no details of how the soldier dead.

According the his POW records  Sapper Unwin was originally buried in Vervins German Cemetery in the  Aisne area of Picardy.

He was re-interred in Grand Seraucourt British Cemetery in July 1920.

It was during the 1st Battle of Ypres  - on the 20th October 1914 - at Ennetieres near Armentieres that  Private Haycox was captured by the Germans.  He remained a prisoner of war for the duration until his eventual  repatriation on 3rd October 1918.    For most of that time he was  interned in the infamous  Claustral POW camp in Lower Saxony, where the conditions were harsh and the regime brutal.

Private W Haycox, a Brimington reservist who has arrived home after being a prisoner of war in Germany since October 1914, states that when he refused to work in the salt mine to which they were sent, they were bayoneted and thrashed by their Hun soldier guards.

‘I was stabbed in both legs’  says Private Haycox   ‘..and then struck between the eyes --- we were placed in a hut up to the waist in water and were kept in this place for seven days.  Every morning we were flogged and  by the seventh day we all gave in and decided to work.  The only food we had was what the French and Russian prisoners, who worked alongside of us, gave us.'

Eventually a plan to escape was arranged and a tunnel dug...  Sixteen Russians, and two Englishmen did get away but the two latter – one of who was himself, were captured close to the German frontier .  The punishment meted out to Haycox was 14 days imprisonment but he fell sick and escaped the punishment

Private Haycox has many more stories of Hun barbarity to tell.

(One month after the article appeared in the Sheffield Evening Telegraph Private Haycox died of the injuries he sustained during his imprisonment.  He was given a military funeral before his burial in Staveley cemetery. He was 32 years old and  lived at Station Road, Brimington) 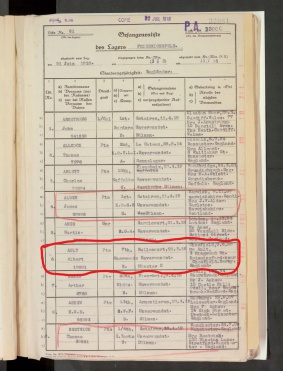 Albert Ault was born in the village in 1890 and lived with his family in Heywood Street.
In 1907 he joined the Sherwood Foresters territorials as a 17-year-old, and when war broke out in 1914 he re-joined he old regiment the 7th Bn Sherwood’s Territorial Force and was soon heading - first to Belgium and then to France.

In 1916 he was shot in his left hip and spent some time in the military hospital in Abbeville. Then in April 1918 he was shot and wounded in the arm whilst fighting near Bullecourt and was quickly captured by the Germans as his unit retreated.  He was held prisoner in that area until the end of the war  and was repatriated back toEngland on 27th November 1918.

He lived in Brimington for the rest of his life, worked at Staveley Works, never married and died in 1945.

Eight weeks ago, these two friends readily responded to Lord Kitchener’s appeal and enlisted in the KOYLI from which regiment they were transferred a week later to the Royal Marines.

Neale and Cole with a number of other marines passed Sun Oct 11th   sheltered in a church and on the following day they were sent by train to the German camp and travelled two days and three nights.

The prisoners get plenty of food and good beds to lie on although Neale states that they are not very safe there.   They both complain of the cold weather and ask for a ‘ganzy’ to be sent.   The prisoners conclude that they are only allowed to write home about once in 6 weeks.

Prior to enlisting Neale was a clerk at Messrs Bryan Donkin’s Works, Chesterfield, while Cole was employed at the Devonshire Works.

(They were repatriated back to "Blighty" in early 1919)

Montague Albert Cole   -  married Daisy Dickins in 1928, moved to Barrow Hill, had two daughters and became an ‘electric tram driver’.    He died in 1976.

Letters from the Front>>
Return to top of Page