A Flawed Peace -  Treaty of Versailles 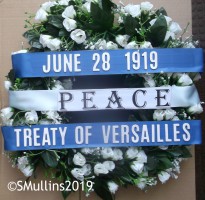 The treaty was signed on June 28th, 1919 by the Allied and associated powers and by Germany and the Central Powers in the Hall of Mirrors in the Palace of Versailles and went into effect on - January 10, 1920. 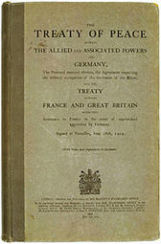 The Treaty formally ended hostilities between Germany and the Allies. It also imposed  harsh terms on Germany as the defeated party.

In addition, Germany was stripped of its overseas colonies, its military capabilities were severely restricted, and it was required to pay war reparations to the Allied countries – which in truth it never honoured.

Treaty Signed for the Allies by -  British Prime Minister David Lloyd George, French Premier George Clemenceau and US President Woodrow Wilson  And for the Germans by  - Hermann Muller and Johannes Bell.

The toll of Brimington men continued for some years up to and after Treaty was signed,  some finally succumbed to their wounds as late as 1922.

Many more would live with crippling disabilities and disfigurements for the rest of their lives, and countless Brimington families were left grieving and poverty-stricken.

For more than 20 years we have committed our time, our money and our total dedication to this mission to uncover the lives of the village men whose names are etched on our war memorial.

We have made countless emotionally - charged journeys to the western front to visit their graves and memorials, over the years. We’ve walked vast acres of the old battlefields in Belgium and France  where many of our Brimington men waited for the whistle to send them ‘over the top’ and into the lottery of living or dying.

We’ve followed the old trench systems where they lived day after day until that dreaded time came – the land now covered by crops, looks so beautiful in spring and summer.   Many of our men still lie in that rich soil  - remembered on the nearby Memorials to the missing.

Countless times we’ve stood at the Menin Gate at 11am and 8pm on  Armistice Day when the town would be heaving with visitors from all over the globe.  The weather some years had been appalling, but it never dampened the spirits around the grote markt  in Ypres where most of the onlookers waited for the parade to march past.

And in the warmer summer months in Belgium we’ve sat near Passchendaele Ridge, looking over the killing fields – now so calm and peaceful - whilst we drank a cup of tea  before moving on to revisit our Brimington lads’ graves  at Tyne Cot.

And on our countless visits to France we’ve met visitors from so many commonwealth countries,  Aussies up at Pozieres,  the Canadians at Vimy Ridge,  South Africans at Deville Wood,  the Newfoundlanders at Beaumont Hamel,  New Zealanders at Longueval  and a family of Indians at their  wonderful memorial  at  Neuve-Chapelle.

Many have taken  a copy of our ‘Brimington Memorial Book’ with them on the journey home, donated freely to them - so Brimington’s soldiers and their sacrifice can be recognised and remembered elsewhere in the world.

So  like the famous WW1 novel by R C Sherriff.. 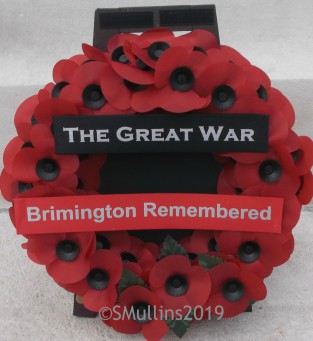 They shall grow not old, as we that are left grow old:
Age shall not weary them, nor the years condemn.
At the going down of the sun and in the morning
We will remember them.