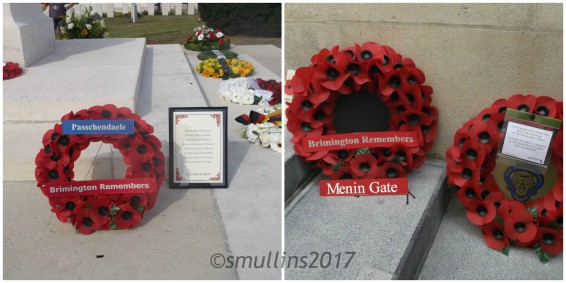 We left the set-piece centenary commemorations behind and set off for the smaller, less well-known places where some of our Brimington men who died at Passchendaele are laid to rest.

We travelled the now well-known routes around Ypres and headed first towards the village of Boezinge and to Artillery Wood Cemetery where Private George Jones is buried - George came from Station Road and was just 25 years old when he was killed in action at Passchendaele on the 16th August 1917.

After we paid our respects and left a cross at his grave, we headed south west and onto the Poperinge road and towards Brandhoek Military Cemetery to leave a cross at Private John Neweys grave - he died of a shell wound to his head on 17th Aug 1917 and left behind a grieving widow, Louisa.

Lijssenthoek came next - a massive military cemetery- which during the first world war was ‘Casualty Clearing Station No 10’ and which now has over 10,000 British and commonwealth graves -  amongst them Brimington man Sergeant George Mace who was grievously wounded in the stomach in October 1917 and died on the 22nd, George was 31 years of age and had fought with the Australian infantry.  His father living in King Street.

Late in the afternoon when the crowds had dispersed a little around Ypres we visited the grave of Private Horace Kirby of Princess Street, aged just 19 when he was killed -he is laid to rest in the Menin Road South Cemetery, just outside the ramparts of Ypres and almost in sight of the Menin Gate.

We left our hotel early and took the route towards Zonnebeke and to Tyne Cot.
In bright sunshine, we laid our wreath on the stone of remembrance, spent a few moments of reflection - for all our Brimington lads who are buried and remembered there - before we left to drive the 6 miles to Ypres to leave another  wreath at the Menin Gate.

Media Interest in our story>>
Return to top of Page