We make no apologies for including

in this tribute to the Brimington men 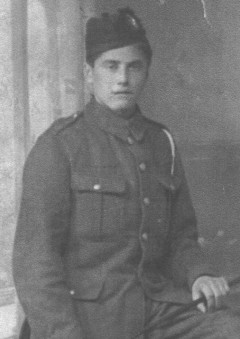 Although he is a Staveley lad and remembered on their memorial; he was my uncle- my father’s eldest brother -and it was he who inspired my lifelong devotion and gratitude to the sacrifices young British men made in the two terrible world wars of the twentieth century. 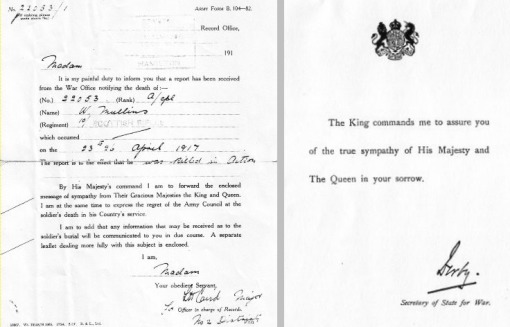 .....Another Staveley lad who has been killed in action is Corp Wilson Mullins of the Scottish Rifles. Writing to the deceases mother who resides in Pipe Lane, Staveley one of his pals Pte E Dronfield says - "it is with deep regret and sorrow that I have to write these lines telling you that Wilson was killed on April 26th.  We had advanced and were digging ourselves in when Wilson was sent out on patrol and he was last seen with his revolver in his hand and he was killed by machine gun fire, I think.  It is very hard as he was doing so well and he had just been made full Corporal.  He was very well liked by all the Section "   Corp Mullins who was only 19 years of age last Christmas, joined the forces in July 1915 and went out to France in November the same year.  He had been previously wounded in August 1916 and returned to the lines since he celebrated his 19th birthday.

Before the war he was engaged at the Ireland Colliery, Staveley.  Deceased was the eldest boy in the family, his mother being a widow with nine children, six boys and three girls. 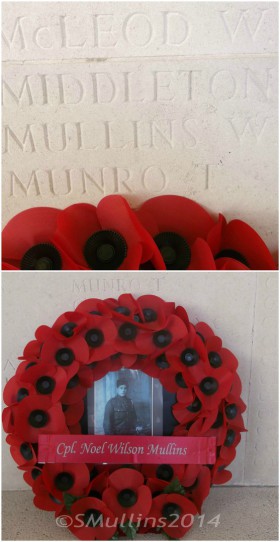 We’ve recently uncovered more information about Private Wilson Mullins war -  this time at the battle of the Somme in summer 1916.

By August his battalion was in the front line near the small village of Martinpuich (an area we know very well) where they endured constant sniper and heavy shelling for many days –  and on August 13th Wilson received a gunshot wound to his lower jaw.  He was taken to the casualty clearing station at Vecquemont for initial medical treatment and assessment-  then later that day he was transferred by train to a base hospital in Rouen for further care.

Below  - Casualty Clearing Station near the Somme in July 1916

After a short rest for recuperation, Wilson returned to the line where he stayed until the battle of the Somme finally ended in November 1916.  By then he had endured some of the worse and most savage fighting in that sector.

Like many descendants of relatives who were killed in the Great War - and have no known grave - we have always been curious about how uncle Noel Wilson Mullins met his end.

And as we regularly visit the general area where he was fighting when he was killed, we wanted to try  and establish if  Corporal Mullins body might have been found and  buried eventually as a ‘known unto God’  in one of the small cemeteries which dot the landscape there.

Official reports simply state that he was ‘killed in action’   on the 26th April 1917.   Other reports record  his  date of death from 23rd to 26th April.   A comrade - Private Dronfield states in a letter to Noel’s mother that her son died on 23rd.  So there does not seem to be an accurate ‘official’ date.

We studied various sources and accounts and the war diaries - for the 46th Brigade, 15th (Scottish Division) – 10th Bn Cameronians Scottish Rifles,  from 22nd April onwards to get a feel of the build up to the objective - the capture of the village of Guémappe  -where Wilson Mullins was killed.

There were some 3000 casualties during those few days of fighting .  Amongst them Corporal Noel Wilson Mullins- who it was suggested from two different sources - was felled by machine gun fire. Which was followed by several heavy bombardments from German artillery – where his body lay.

When Guémappe was finally captured  by the 15th (Scottish) Division, there are a number of reports about the burial parties and the collection of the dead -  carried out over several days after the battle.

By  which time, many bodies would be unrecognisable following constant enemy shelling , which left little to identify the fallen soldiers -   and Wilson could have been one of them.  All however would have been buried as some point by their comrades.

CWGC information about the fighting around Guémappe in April 1917 show  there were TWO cemeteries associated with the action in that area  – Tank Cemetery was begun in April 1917.  The cemetery now contains 219 burials - 25 of the burials are unidentified .

The second cemetery is Guemappe British Cemetery  which was begun by the 15th (Scottish) Division after the capture of Guemappe. The cemetery contains 169 burials, 6 of them unidentified.

Either of these cemeteries could be the last resting place of Corporal Mullins, his remains are certainly around there somewhere.  So, in a further act of remembrance to a lost uncle, we placed a special wreath on  the grave of an ‘unknown’ soldier of the  Cameronian Scottish Rifles - who was killed on 23rd April 1917.

It just might be the last resting place for Corp Noel Wilson Mullins. 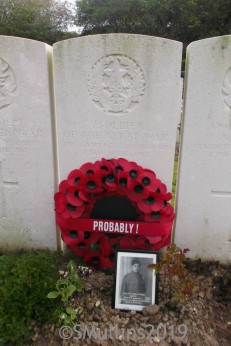 The Men who came home>
Return to top of Page