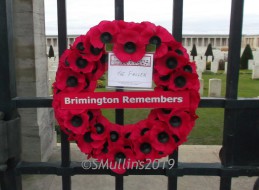 Despite the most horrendous weather in and around Albert on the 11th November we still managed to attend a number of commemoration events throughout the day.

Dodging the rain as best we could, we called at Thiepval, Lochnagar and the Ulster Tower to pay our respects, as well as a number of the small villages dotted around the Somme.   And this year we left our ‘Brimington Remembers’ wreath on the gates of the Pozières Memorial, where it could be seen from the road. 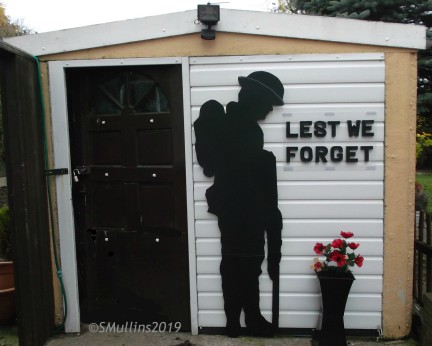 Before we left to attend a number of Armistice commemorations around the Somme area,

we put in place our annual  'Remembrance' display outside at home.

Despite the passing of the centenary of the end of the First World War-  it was heartening to see the usual 1st July – commemoration ceremonies were still taking place all around the Somme area.

We chose to attend one of the smaller commemoration services at  Montauban-de-Picardie, a small village in the heart of the fighting area.  The villagers turned out in force to honour the fallen, and a company of ‘British Tommies’  added significance to the event. 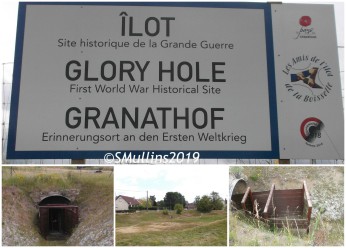 The Glory Hole (ILOT) at La Boisselle was unexpectedly opened for the day on 1st July so we took the opportunity to look around the site.  We have followed the project’s progress for many years, so we were thrilled to be able to take a closer look at long last. 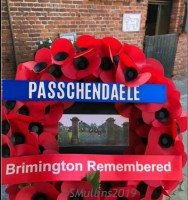 We’ve known about Pond Farm Museum  and its proprietor Stijn Butaye for years, but we’ve somehow never gotten around to booking a visit – until June this year – 2019.   Stijn guided us on an extensive tour of his museum which  was even better than we’d expected.

The collection of items from the First World War were all found and dug up on and around the farm,  including live munitions - and Stijn gave a fascinating explanation of many of the items. And of course, the star exhibit for us was the famous Damon II﻿ Tank  which Stijn has been painstakingly building/restoring for many years.

Before we left, we gave Stijn a  special Brimington Remembered wreath
( pictured above)  which we’d made especially for him – it is now exhibited in the museum .
Pond Farm facebook -   www.facebook.com/www.depondfarm.be 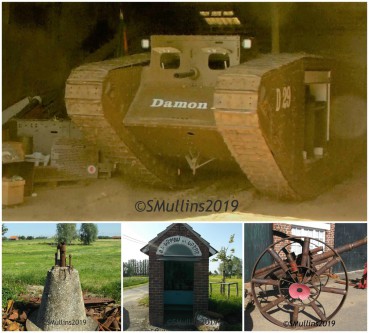 Above -  photos from Pond Farm

On 16th April 2019 we were honoured to attend a rededication  burial and  service for an unknown WW1 soldier.

His remains had been recovered in 2018 near Ginchy on the Somme but despite extensive research by the CWGC it was not possible to identify the soldier or his regiment.

He was afforded a military funeral attended by British Defence Staff, local dignitaries, CWGC staff,  and with us and a few other members of the public standing in respectful silence.

His union - flag draped coffin was carried to the graveside by soldiers from the 4th Bn The Mercian Regiment, who performed the sad task with respect and dignity for their fallen comrade.

The deferential  service was conducted by the battalion Chaplain and close by the headstone, stood ready to be put in place and bore the inscription ‘Soldier of the Great War, Known unto God’
​

As the coffin was finally lowered into the grave,  it was for us a poignant reminder that many of our Brimington men were lost and never found in the surrounding fields.  And maybe – just maybe this unknown soldier might have been one of our missing men. 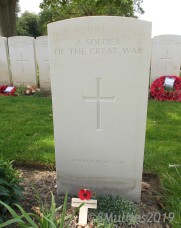 We revisited 'Guards Cemetery' at Lesboeufs to see the grave of the unknown soldier  - now at peace amongst his comrades.

We have recently been recognised by the ‘Big Ideas’ organisation - not only for our  decades of research into  Brimington’s  part in the first world war  but also for bringing  the village community together  to make.....

‘ an outstanding contribution to the Remembrance of all those who served in the first world war..' 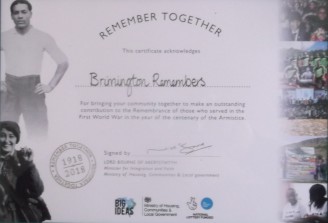 The certificate of recognition

During 2017/18 The ‘Big Ideas’ project ran a campaign to help raise awareness of the centenary of the end of the great war -  in November 2018 – we were invited to contribute throughout the year.

Our research on Brimington’s women roles in the war won special praise.  And our formation of the ‘Brimington Remembers’ group which successfully organised 2 village events during 2018 and brought the community together helped towards the final judging.