We visited the new permanent exhibition at Thiepval Memorial during our visit to the Somme in April this year.

We’ve watched the new building being constructed during our visits to the area over the previous year.  The museum is an extension of the Thiepval Memorial Visitor Centre and most of it is underground -we’ve been eager to visit it and it didn’t disappoint.

It uses the latest state-of-the-art interactive technology to help tell the story of the tragedy of the Battle of the Somme to a new generation.

A 60 metre long mural of the Somme battle -  by a local French artist - dominates the exhibition.  There are letters and personal effects on display as well as artefacts found in the area - many of the items were found during the construction of the museum.
Our photos below.........

Interviewed by the BBC

On Tuesday 18th July we were interviewed by a BBC journalist about our research and dedication to Brimington’s soldiers in the Great War.

We met in the Community Centre in Brimington and he proved to be a very nice man who made the experience quite enjoyable and relaxed.

After a lengthy interview about the whys and hows of what we have achieved so far, we showed him around the village where he photographed the places that have featured in our research -  the streets of New Brimington were of particular interest to him, as well as the memorial gates and St Michael's church.   It was a great experience for us.

The interview etc was featured on the BBC website at the end of July as part of their centenary tributes. 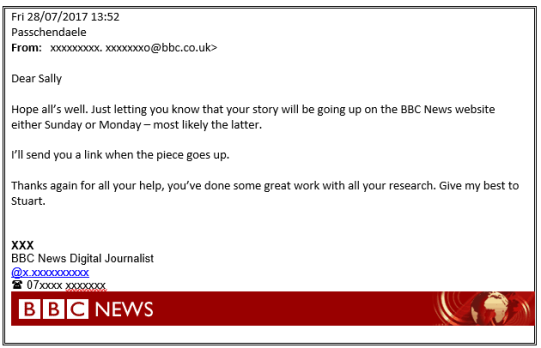 In readiness for the start of the official Passchendaele Centenary Commemorations on 31st July in Ypres, Belgium we have put together a display in Brimington Community Centre in remembrance of our Brimington soldiers' sacrifices in that terrible battle. 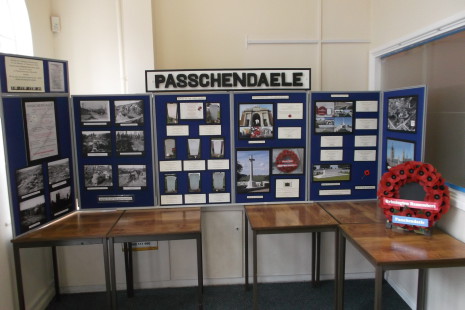 Following our “brush with fame” after interviews with the BBC news team and with broadcaster Adrian Chiles on his Radio 5 live show, we returned home from the Passchendaele commemorations to find we’d received over two hundred new visitors to our website and we’ve received over a hundred emails from people across the country thanking us for our efforts in searching and finding our Brimington lads and for our website.

In 2015, through our research we discovered that Private George W Bradshaw had won the Military Medal, yet his gravestone did not reflect this award. So, we contacted the CWGC and presented our findings to them.  And a few weeks later they confirmed that they had amended their records and that a new headstone for Private Bradshaw would show his achievement. (See latest photograph of Private Bradshaws below - showing his 'MM')

Then during the summer of 2017 whilst compiling the list of our village men who died at the battle of Passchendaele ( in readiness for the centennial commemorations)  we found that Private George Walter Bradshaw had -for some reason -  never been included in the official Passchendaele database to the fallen - even though he clearly died in the battle and is buried in Tyne Cot Cemetery.

We consulted the ‘Memorial Museum Passchendaele ’the official custodians of the records, to ensure that Georges story was acknowledged -and we can now confirm that we have received the following email advising that Private G W Bradshaw is now officially recognised and the personal information we supplied about him has been added to their database.

Email from Simon of the ’'Memorial Museum Passchendaele'' ------ 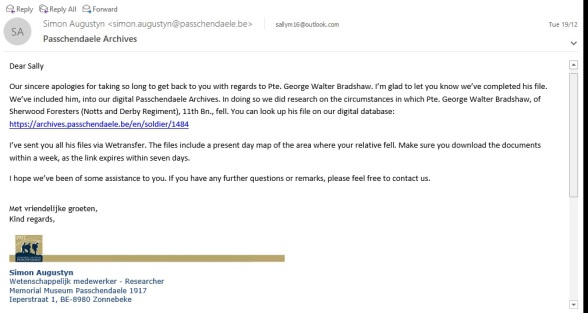 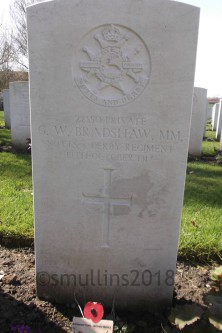