Interesting story of Brimington footballing family – caught up in the first stages of the war in Belgium.  Courtesy of the Derbyshire Courier (1915)

MAY 2015  ‘Brimington Family of footballers -
Escape the Germans’

Born 1869 Charles Bunyan  moved to Cow Lane, Brimington as a young man around 1880.  He married  local girl Eliza Taylor and their three sons were born in Brimington.

Already a talented footballer Charlie began playing for local village sides before playing his first game for Chesterfield in 1886.   He went on to play professionally for Hyde Football Club then Sheffield United, Derby County and Walsall and a stint with Newcastle.

In 1909 he became the first Englishman to coach an overseas team with his appointment as coach of the Racing Club of Brussels.  By now two of Charles’ sons Charlie junior and Maurice were notable footballers in their own right and   joined their father in the Belgium team - and then followed him when he moved on to coach the Standard Liege team.  The other Bunyan brother –Ernest moved to Belgium at the same time but did not seem to play football at the same level.

When the Germans invaded Belgium in 1914 Charles and his sons were forced to flee and return to England.   Ernest Bunyan wrote of the horrors of that escape  ------

Together with a number of Belgium’s it took them 3 days and nights , dressed as beggars  – ‘....travelling mostly at night to try and evade the marauding Germans’  before they reached the Dutch border.   The horror did not stop there, for Ernest reported that a number of Belgium refugees were   'shot and killed by the Hun...'   as they tried to cross the border' and   '..who thought nothing of shooting at unarmed women and children..'

On their safe return to England - Charles and his three sons – all enlisted in the army: -  Charles joined the Footballers Regiment, Maurice - Royal Marine Light Infantry, Charles Junior and Ernest joined the Royal Field Artillery.

All survived the war.  Although Charles senior suffered severe shell-shock and was ill for some time but eventually he did return to football - in 1922 - as manager of Anderlecht but died a few months after taking up the role.

Two of his sons also returned to football.    Charles Junior (known in Belgium as Cyrille Bunyan) went on to play for Racing Club of Bruxelles and Chelsea and managed the Anderlecht side after his father died.   He died in 1975

Maurice also played for Racing Club de Bruxelles & for Stade France and competed for Great Britain in the 1920 Olympics.  After the 2nd world war he managed the French side Bordeaux and worked with Jules Rimet of World Cup fame to write the French language book ‘ Le football simplifié’.  He died in 1967.

We were invited to contribute to the First World War exhibition at this years Staveley Armed Forces weekend staged at Poolsbrook Country Park.  The annual event is held in honour of all those who served and are still serving in our armed forces.

Our Brimington Memorial display stand included photographs, personal stories, books, maps & military records of our soldiers.  A compilation of our  'Letters from the Front ' web page generated a lot of interest and questions about Brimington and the Great War.


We can also boast of a visit by Vice Admiral Peter Hudson and The High Sheriff of Derbyshire- Oliver Stephenson who showed great interest in our display and our research.

Sad news of the death of Mrs Grace Stott in Nottingham aged 96 years and 7 months.  Grace was the sister-in-law of Brimington’s youngest soldier to die – Private Horace Stott.
We had the privilege for many years of knowing Grace - an independent and feisty lady despite her advancing years.  Her incredible memory and stories kept us enthralled.

Grace married Ron Stott (Horace's brother) in Brimington Parish church in 1940 and eventually they moved to Nottingham.  Ron died there in 1987 and Grace continued to live in the same house until her death.

On 10th August 2014 she attended the commemoration service in Brimington for the start of the Great War and was rightly the centre of attraction -  with many of the local 'dignitaries' eager to make her acquaintance, Grace took it all in her stride.  She passed away peacefully in hospital on 26th June 2015.

Graces funeral service in Nottingham in July was a small and intimate affair which celebrated her long life with a mixture of memories and music.

We shall miss her.  Rest in Peace.

The visitors centre at the Memorial is also being improved and enlarged. 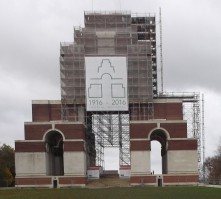 THE THIEPVAL MEMORIAL - THE NEXT 100 YEARS

During our annual Armistice pilgrimage, we visited Thiepval Memorial as usual and checked on its current 'work in progress'. Vital repair and improvement work began in June 1915 - Phase 1 is to tackle the memorial roofs and make it watertight. Phase 2 will replace the existing drainage system.  All to be finished in time for the July 2016 Somme centennial anniversary.

Nothing much to see at the moment except concrete and ground works !!

We’ve been thrilled to receive these very special photographs from Paul Wilson in Dorset – of his great uncle -   L/Corp Leonard Wilson. (Reproduced with his kind permission).  The soldier was a manager at Hunters Grocers, Brimington prior to his enlistment.  He was killed by gas poisoning in May 1918. 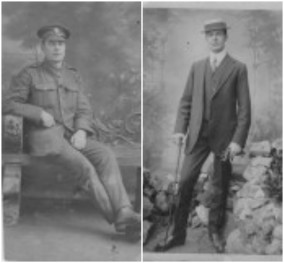 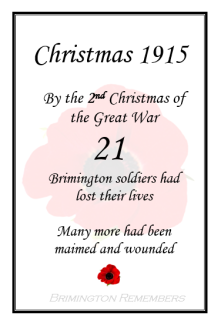 Remembering the second Christmas of the Great War -  below is a copy of the plaque we placed just prior to Christmas, in St Michaels Church, Brimington, reminding us of those men lost from our village- in just over a year of war.