The Mills Brothers of Tapton Grove 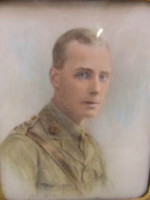 Tapton Grove as it is today

By 1891 the Mills family had moved to Hady House – another Georgian mansion in the area,  but were back at Tapton Grove by the turn of the century by which time Harry was at Sedbergh public school, in what is now Cumbria   and Robert was a boarder at Oatlands school in Harrogate, before moving on to the prestigious Rugby School. Upon finishing his education Robert, who preferred to be called Nicholas, began working for Markham & Co Ltd  then swiftly moved on to become foundry manager at Clay Cross Company.

Just before war broke out he accepted an engineering position in Spain and on the declaration of hostilities he had some difficulty getting home.

He was commissioned immediately and took up his duties as an officer in the Sherwood Foresters  Army Service Corps and served at Sulva Bay in the Dardanelles where he was mentioned in despatches. After serving as Embarkation Officer at Alexandria for a time he transferred to the Royal Flying Corps.

On the 6th June 1917 he married Miss Marjory Frances Blake, youngest daughter of Sir Francis Blake MP and Lady Blake  10 Old Court Mansions, Kensington before he returned to his flying duties on the western front. It was on the 23rd September 1917, whilst he was piloting an R.E 8 of the No 53 Squadron near the French/ Belgium border, that he was shot down by the German flying ace Leutnant Erwin Bohme - both Captain Mills and his observer Lt William Browne were killed.

Captain R N F Mills  is buried at Pont-Du-Hem cemetery in France and Lt William Browne is buried next to him.

R.E 8 - A British two-seater bi-plane used for reconnaissance and bombing during WW1

Despite many years of researching we have uncovered little information about Harry Forster Mills’ life between leaving education and joining the army.  There is some evidence that he went out to South Africa in  the early 1900's, and made the journey  home once war was declared - arriving back in Britain in early 1915.   He joined the RFA as a Lieutenant and was promoted to acting Captain just prior to his death. He was killed in action during the German attack known as Operation Michael or Kaiserschlacht on the 21st March 1918 , in the Pozieres area of the Somme.

Captain Harry Forster Mills has no known grave and is remembered on the Pozieres Memorial.