Charles Kent was born in  John Street  Brimington in 1876,  one of six children of an iron works labourer Caleb and  mother Maria .  By the age of 12 Charles was working down a local pit as a colliery  labourer. Yet from such humble  beginnings Charles Kent rose through the ranks,  became a highly decorated soldier,  honoured by the Russian Czar and  shook the hand of the King of England.

His remarkable story begins, when  in common with a number of other Brimington lads, Charles joined the local  Derbyshire  Yeomanry volunteers.  Before long he had  decided on a full time army career and he attested in 1895  joining the Durham Light Infantry .  It was whilst stationed  in Newcastle that he met his future wife – Mary Neville whom he married in 1900.  And after that his army career began to flourish.  In 1901 leaving behind his wife and new born son – Thomas,  the newly promoted  ‘Sergeant’ Kent sailed for a tour of duty in India where his battalion was put in charge of guarding prisoners from the Boer War,  who were imprisoned there.

After his return to England back with his wife and child they  moved frequently to where ever his battalion  was posted.  He spent time in Colchester & Wellington barracks as drill sergeant and spend over four years in Ireland by which time his offspring expanded to eight children. 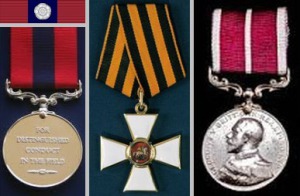 At the outbreak of the Great War in 1914 the Brimington soldier was now  Company Sergeant Major of ‘D’ company  2nd Bn DLI  and  in September his company engaged the Germans at the battle of Troyon where he was awarded the Distinguished Conduct Medal for rescuing a wounded officer under fire.   Citation reads:

“For gallant conduct on 20th September 1914, at Troyon, valley of Aisne, when he voluntarily assisted in the rescue of a wounded officer under a heavy fire."

He received a bar to his DCM  in September 1915 after yet another act of bravery -   Citation reads :

"For conspicuous gallantry on the 9th August 1915, at Hooge, during the  attack. Later, about 3pm, some men started to withdraw from the vicinity of the "Stables" CSM Kent, with three others, succeeded in rallying them and leading them back to the vacated trench under persistent shell fire. In rallying these men considerable open space had been crossed. He remained in his position until about 9.30am on the 10th August, no orders to withdraw having been received."

Charles Kent became Lieutenant and Quartermaster of the 20th (Wearsiders) Battalion DLI, ending the war as a Captain he was also awarded the Meritorious Service Medal and the Russian Cross of the Order of St. George.

He was discharged from the army in 1917 having served for 22 years,  his Commanding officers report stated his    '... character was exemplary '      he was   ‘an.... excellent soldier in every respect -   smart, sober and absolutely reliable...’

In the 1920’s he became  involved in the newly formed British Legion and became treasurer of his local Durham branch,  - and it was there that he was introduced to King George.  It was reported in the local press that the King shook the soldiers hand warmly and  was heard to remark   ‘ I see you are wearing the Russian Cross of  St George?  I am very pleased to see you”     Charles died in 1956.

Not bad for a Brimington lad !

Cemeteries >
Back to top of Page