What befell the village of Brimington from that exceptionally hot summer in 1914 to the terrible conclusion of late 1918—and beyond—defies imagination to our generation.

Many of their deaths were not witnessed by their comrades, so little remained to give their loved ones a modicum of comfort in their grief. Some accounts were related eventually to mothers, fathers, wives, and sisters of the last few agonizing moments before a shell or snipers bullet prematurely ended their young lives .

Commanding Officers wrote about their  ‘brave deeds’ and that the young soldier was ‘extremely popular amongst his comrades’ and that they ‘met their death like a true hero’, comforting words perhaps but nevertheless that soldiers death not only robbed a wife, or mother or child of a guiding light but it took the very best of   Brimington's men.

The following pages can never make up for the loss or even begin to help us understand the sacrifices that were made by these young men and their families but perhaps they might evoke more than a passing glance from the newest residents of our village.  Almost every street and road in Brimington was affected by The Great War.  Burnell Street lost six young soldiers, Queen Street lost eight, Victoria Street eleven and a staggering nineteen from Station Road were killed.

Friends joined up together, George Morley from Victoria Street enlisted with Norman Woolley. Harry Marshall and Fred Mann joined the Lincolnshire Regiment on the same day Fred Hobson and Charlie Hurst—close friends, joined the forces together and died together on the same day.

And brothers, ever eager to outdo each other enlisted and caused their parents, wives, and girlfriends double the anguish when they were lost— the Ashmores, the Croziers, the Bradshaws, the Mills, Smith, Bakers and Malams. 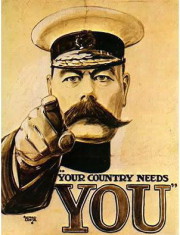 This famous Lord Kitchener poster of 1914, enticed tens of thousands of young men to join up.

Young men, such as  Sidney Lawrence Baker of Station Road,  Brimington  a clerk at Chesterfield County Court offices, enlisted almost from the outbreak of war, and was killed a year later in Ypres aged 24. 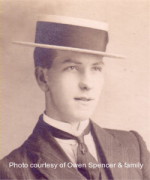 Old soldiers like Edward Garland who'd already been a regular soldier and saw service in the Boer War and India, rejoined his old regiment  -7th Bn Wiltshire’s - almost immediately war was declared, leaving a wife and young daughter behind at Brimington Common 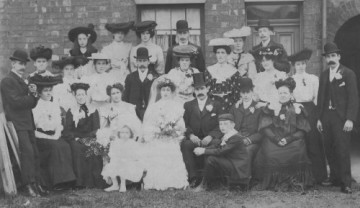 When this family wedding photograph was taken ( at 35 Ringwood Road, Brimington)
around 1910, there could have been no warning of the carnage to come just a few short years later. A number of men in the picture would have been the right age to enlist or later to be conscripted into the army. Unfortunately most of their names are not known, so Ive been unable to trace their fates.    But almost everyone in this small group would have been affected by the war.

Finding the Fallen >>
Return to top of page