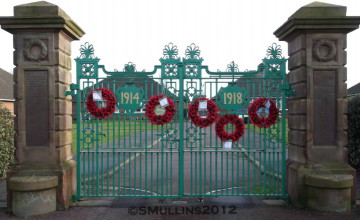 " To the glory of God

In sacred memory of

Who gave their lives for us "

(With no first names, rank or regiment it has made identifying the soldiers very difficult

- and many of the names are spelt incorrectly)

The First World War Memorial inside St Michael and All Angels Church, Brimington

There is also a list of Brimingtons fallen inside the church

The  sculpture and memorial plaques to the fallen soldiers were erected by Mr & Mrs  R F Mills of Tapton Grove (who lost two sons in the Great War) and unveiled in a ceremony conducted by the Bishop of Derby in April 1921.

The sculptor explained  that his artwork '

'.......must endeavour to suggest – particularly to generations to come that nobility and fortitude  in suffering which so characterised our dead' He went on to day  that he '..used the Britannia’s helmet  ' to symbolise the navy,  the sword and shield for the Army  and wings (on the helmet)  for the Royal flying corps.  The laurel wreaths and the figure in an attitude of mourning represent victory through suffering.   The scales in the mouth of the lion ( on shield) means victory combined with justice'

Village at War >>
Return to top of Page