Pilgrimage to the Western Front 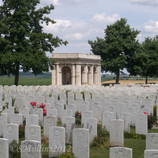 In 2005 we began to visit France and Flanders a couple of times a year - on organised coach tours to the Battlefields of the Great War. It enabled us to gain valuable knowledge of the regions where our Brimington men were buried and remembered on memorials. Unfortunately many of the places we needed to get to covered a vast area and were simply too far from the usual routes on commercial coach trips, and although we did manage to visit some graves in order to pay our respects on behalf of Brimington, we knew it wasn’t enough and it was taking us too long.

By 2011 we still had at least 33 cemeteries to visit in France and Belgium, so we began the plan to drive ourselves to complete the remaining graves. It took us weeks of plotting the route – the area covered some thousand square miles  We needed to pinpoint the cemetery’s co-ordinates, plan the directions and come to terms with driving on the continent – which neither of us had ever done before. There was also the language problem - neither of us knew French or Flemish- and we needed to find suitable hotels etc. 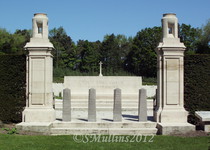 So early May 2012, armed with sat-nav and a mountain of information we set off, headed for an overnight stay in Folkestone and early on Sunday morning we went through the Channel Tunnel to Calais. From there we travelled up the coast into Belgium and to a place called Koksijde (Coxyde), less than 30 miles from Ostend.

We found the cemetery with relative ease on a lovely late spring morning, and using a printout of the grave reference  we found the final resting place of Corporal Ernest E Hewitt late of Burnell Street  Brimington. By the time we arrived at our lodgings for the night at the famous Talbot House in Poperinge, Belgium we had visited three more cemeteries and paid homage to our Brimington men buried there. 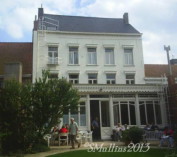 Staying at Talbot house (TOC H) was an utter privilege for it was the place where thousands of British soldiers in the Great War spent their R & R. We even slept in one of the rooms that they would have slept in, all lovingly preserved. It was a place where rank was left at the front door and there was always a pot of tea to welcome them.

There were books and comfortable chairs and there was even a chapel furnished by the soldiers in the loft at the top of the house. And despite the carnage of war only a few miles away, it was a unique place that lived in the hearts and minds of all  the men who passed through its doors. So for us it was indeed to coin a phrase like ‘walking in the footsteps of heroes’

Leaving Belgium the following morning we headed into France, carefully plotting our way south to pick up the isolated cemeteries near the villages at Laventie,  Lapugnoy,  Cuinchy and Pont-du-Hem. Names that had lived with us for years, as had the men who were buried there, Walter Malam, Harold Dolby, David Gallacher and Robert Mills.

Our routine became vital for success on that first day in France, with so many isolated cemeteries to locate, the vast area to cover, the graves to find and roads, cart-tracks and tiny lanes to negotiate we became adept at finding the cemetery, and locating the grave helped by the Commonwealth war graves commissions, cemetery layouts.

Yet then came the hardest part of all, seeing the names we had come to know so well etched in stone. We had come to know these Brimington men over the last decade or so, we had photographs of some, descriptions of their physical appearance for many, we knew of their families and occupations and their hobbies.

It was an emotionally draining experience for us both, and after placing a cross and special plaque on behalf of Brimington we’d spend a few moments of silent contemplation.  Then it was back to the car, and before the wheels were turning, we’d punched  the next co-ordinates into sat-nav and we were off again to the next location. 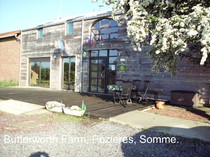 By late afternoon we needed to book into our accommodation so we headed down to the Somme area and to the famous village of Pozieres (where in September 1916 the British invention - tanks, also known as 'Winstons Follies' were used for the first time as weapons of war ) .   Our home for the next few days was at Butterworth Farm, named after the English composer George Butterworth, who was killed in action close by.

The farm is  owned by the Mayor of Pozieres, Bernard Delattre and his wife Marie and they made us so welcome.      It was a glorious experience waking up in the middle of the Somme, and it gave us a good base to continue our odyssey .

We stayed at Butterworth farm for four days, and each day we planned our routes with military precision. The weather was kind to us sometimes, and not so auspicious at others, we  picnicked in the pouring rain near Duisans British Cemetery, north of Arras ,where Lance Corporal Harry Wood is buried.  And sat by the side of the road near Blighty Valley in the middle of the Somme in warm sunshine, drinking tea. 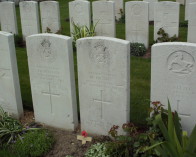 By the end of our stay at Pozieres we had visited 30 different cemeteries, a monumental achievement for which we are justly proud.   From Koksijde on the Belgium coast to Saint Quentin and Amiens in France, we covered an area of a thousand square miles- and on each grave we visited, we would leave a plaque, or cross or a poppy on behalf of the village, and as is now our ritual, we touch the gravestone or the name on the memorial and wonder why the young lad from Brim is there and not at home in the local cemetery where his family could have mourned his passing and laid flowers every Sunday on his grave.

Saying farewell to Bernard and Marie our hosts at Butterworth farm, we headed back north, but first we had two more cemeteries to locate. We drove 120 miles to the huge port of Boulogne to visit Private Harry Marshall’s grave - Harry was only 22 years old when he died of his wounds. It was a particularly sad visit for us for Harrys last words to the nurse who tended him were ‘...you will tell my sister wont you?’ Easily we remembered those words as we stood beside Private Marshall’s grave.

We moved on and after negotiating the heavy traffic through the bustling city we headed to Sangatte, Calais – some 30 miles along the coast road and to Les Baraques Military Cemetery to find Walter Higgins. We found him, gave our thanks, spent a few moments by his graveside, then headed off to catch the Euro shuttle.

By the time we returned to Brimington that night we had achieved more than we had ever hoped for, but one cemetery St Sever  in Rouen had been just too far for us to go on that expedition, but with two Brimington men buried there we made the decision to go back to France at the first opportunity.  So May 2013 we drove 140 miles from Calais to Rouen and found the graves of Sergeant Edward Garland and L/Corp Leonard Wilson in St Sever – a vast cemetery of some 8,348 graves. And thus completed our pilgrimage of visiting all the Brimington soldiers on the western front.......

But there is still Germany, Gallipoli, Jerusalem & East Africa to get to before we can really complete the task..... but as we get older, that might be an impossible dream.

Our Book >>
Return to top of Page