Once we'd completed what we'd set out to do- finding the Brimington soldiers- we did something we had always hoped we would be able to achieve - publish a memorial book as a tribute to the men.

At the beginning of our odyssey we'd approached our local parish council to ask if they wanted to be involved in our project - they didnt at that time. A few years later we approached them again, because we realised how valuable our research might be to the village and in truth we'd hoped they might want to contribute financially because by then we had spent a small fortune and the cost of getting the memorial into print was going to add to that considerably. But unfortunately the council turned down our request so we had no option but to fund it ourselves. 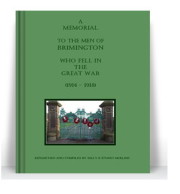 By 2012 we were ready to get the information into print, and chose the internet - which had helped us so much over the previous decade- as the medium to do it. We selected an on-line publishing company - downloaded their software and began to compile the memorial book.  Working on it- in-between earning a living- it took months of work before we were ready to press the button and send it to print.

The financial cost of it all was high but we have done it all willingly   We ordered a limited  number of copies and determined not to make money out of this we donated  copies to the descendants we have found - and to local studies, libraries, the church and people who have helped us over the years - and ironically the parish council.   It proved so popular we had to reorder more copies ( and amended the spelling mistakes at the same time!) 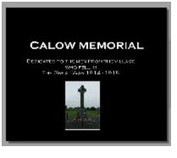 The feedback we've received has been encouraging to say the least, and spurred us on to undertake another challenge when we were asked -  finding the Men from Calow who died in the Great war (Calow is the next village to Brimington)  We've just completed it, printed it and donated copies to St Peters Church and Calow     C of E  Primary school.

Neither book is for sale.  But with the centennial of the start of The Great War almost here - our dream would be to distribute freely more copies into our local schools and scouts and guides so that the  younger generation might know what happened to their village a hundred years ago.  The 'normal'   funding from government sources has not materialised.  So we began to approach several local charity trusts, and to our surprise and delight one - whose name will remain anonymous- donated a substantial contribution for which we are truly grateful. 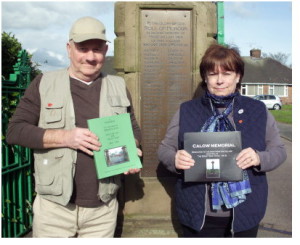