It started as an interest and grew  into an odyssey

In 1998 with the internet in its infancy, and with a newly delivered computer, we – my husband and I, stumbled across a recently created website for the Commonwealth War Graves Commission (www.cwgc.org).

With a mutual interest in both World Wars but with very little knowledge of the men of our village who fought and died, we decided to put the website and our new pc to the test.

After scribbling down the sparse details of the First World War from Brimington Memorial gates, we naively expected it to be easy to find the village soldiers. It soon became clear however that the task would be monumental.

The sheer volume of the British war dead defies belief, and the lack of information on the memorial gates - just an initial and a surname, some spelt incorrectly - made searching painfully slow and laborious but it began a decade of obsessive dedication of finding the Brimington men.

Every spare moment we had was spent researching, - few genealogy websites existed in the early days and what were accessible cost a fortune to search - so it was a difficult process checking archives, war records, newspapers, contacting Great War study groups, various regiments and the WFA (www.westernfrontassociation.com ) who were so helpful and we owe them a lot.

There were the hours and hours spent at Chesterfield library wading through old microfiche copies of Derbyshire Times and what ever local studies information we could find. We purchased a complete copy of the 1901 census for Brimington and bought countless books to help in our understanding and research.

Unfortunately, more than half of the Great War service records were destroyed in September 1940, when a German bombing raid struck the War Office repository in Arnside Street, London.  However an estimated 2.8 million service records survived or were reconstructed from Pension records.

This means that there is a roughly 40% chance of finding the service record of a soldier who served between 1914-1920. So we were lucky to find as much as we did, and slowly we began to piece together the personal backgrounds and military histories of the lads from Brimington who lost their lives in the 1914-1918 war.

We still haven’t found all of them despite these years of work - there is a handful that remains elusive- 5 at the last count.  We more or less know who they are but we can not corroborate the information we hold, so until we can prove it conclusively, we will keep on searching and corroborate the information we hold and hopefully update this website.

It has taken a lot of heartache, money and time to get as far as we have, but we will keep doing it, just as long as health and finance permit. And neither do we want this information to be lost, because the young men of Brimington who gave up everything deserve better than to be a mis-spelt name etched on a brass plate which is largely ignored. 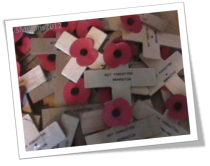 Pilgrimage to the Western Front >>
Return to top of page