Growing up in Brimington, we were always aware that we had a Victoria Cross winner living in the village.    Then a few years ago Fred Greaves name came to the fore again in our local press, after someone suggested naming a new road after him.

As we were already heavily involved in our research of the Great war, we'd  read about Fred a Corporal then- and of the Belgium village - Poelkappelle - where he'd won his prestigious award, and we'd visited the cemetery there where many of his comrades had died in the battle - so we decided to learn more.

On a hot July day, armed with a photo of Fred taken from the Derbyshire Times, and a stack of information about the battle for the village, we headed for Poelkappelle to try and pinpoint the place where he'd won his VC.

By chance we called at a small cafe  'Cafe de Zwann' in the village with the intention of having a drink and getting our bearings, when the young  cafe owner, spotting the photo in my hand called out  ' Fred Greaves!'

We were astounded, and he pointed to a plaque on the cafe wall  which was a kind of shrine to Fred.  He explained that the village of Poelkappelle still hold Fred Greaves in the highest regard.

It seemed an incredible co-incidence for us to choose that particular cafe, amongst a number of others open there that day.  We took photos of the cafe owner and his wife, holding the ' Fred Greaves' plaque  and sent a letter to the 'Derbyshire Times' . 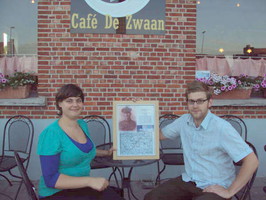 We've been back to Poelkappelle a number of times,  and had a particularly memorable few days there, staying  in a charming little b &b called T Oud Gemeentehuis.  Unfortunately by then the Cafe De Zwann had changed hands and we were told the Fred Greaves shrine had moved with the owners. 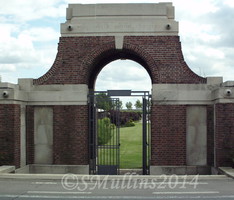 We dropped into Poelcapelle again to see what was happening to the old ‘Café De Zwann’ site.

The new building was well on the way to being completed. And is destined to be commercial offices,