During our many years  researching  Brimington’s  soldiers  we have been privileged to visit literally hundreds of Commonwealth War Graves Commission cemeteries.  And we have never failed to be deeply moved and highly impressed by the dedication still shown to the British and Commonwealth soldiers by the Commission.

Individual graves are marked by uniform headstones, different only in their inscriptions: the national emblem or regimental badge, rank, name, unit, date of death and age of each casualty is inscribed above an appropriate religious symbol and a more personal dedication chosen by relatives.

More than half of Brimington's Great War soldiers have graves.  Many  of their headstones were weather worn and barely readable, but in the years we have been visiting the western front some have been replaced  whilst other are still waiting.

In any cemetery with over 40 graves, you can find the Cross of Sacrifice, designed by the architect Sir Reginald Blomfield to represent the faith of the majority.   All follow the same original design  - a simple cross embedded with a bronze sword and mounted on an octagonal base 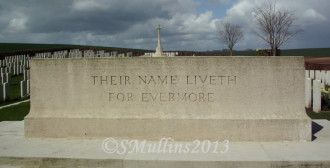 The Stone of Remembrance
The words carved on every Stone of Remembrance, “Their Name Liveth For Evermore”, were suggested by Rudyard Kipling. The phrase is taken from Ecclesiasticus, Chapter 44, verse 14: “Their bodies are buried in peace; but their name liveth for evermore" 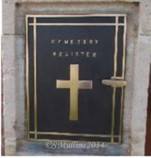 At each cemetery you will find a printed register showing the service details and, in some cases, family details, of the men and women buried. There will also be a grave plot reference and a layout plan of the cemetery to help find the grave. And a visitors book which you are invited to sign, and leave your thoughts. 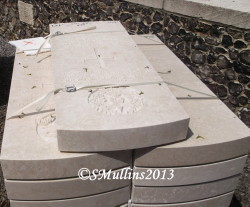 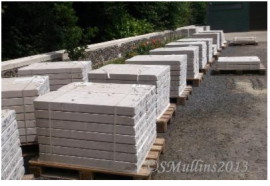 'A Soldier of the Great War"

Over 700,000 British and Commonwealth soldiers are buried  but not identified by name or have no known grave but are remembered on a memorial.

So of course it is possible that many of Brimingtons soldiers classified as  'no known grave'  are buried somewhere.

In some cases soldiers were buried in collective graves, as distinguishing one body from another was not possible and so one headstone covers more than one grave.

If a soldiers country, rank, and/or regiment could be accurately confirmed then the headstone would reflect the details.

You see so many different headstone inscriptions as you walk along the rows and rows of graves in CWGC cemeteries - here are just a few:

THEY MAY NOT BE KNOWN... BUT... THEY WOULD BE MOURNED 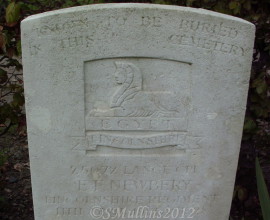 There are a great  number of soldiers who are known to be buried in a particular place but the exact burial plot was not recorded or was lost.
One of our Brimington men - L/Corp Edward Newbery is buried somewhere in Wancourt British Cemetery in France, along side over 1900 comrades.

'Known to be buried somewhere in this cemetery'

Unfortunately the headstone is weather-worn and the lettering very faint 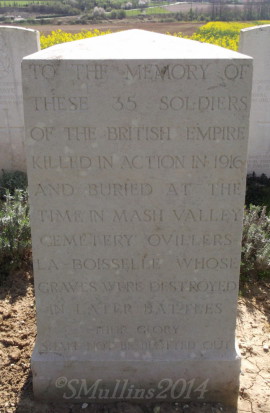 During the four years of fighting and with battle lines ever changing, many graves and burial grounds were completely destroyed by artillery - some more than once.

Eventually comrades would erect memorials to the men who were lost and lost again.

TO THE MEMORY OF THESE 35 SOLDIERS OF

THE BRITISH EMPIRE KILLED IN ACTION IN 1916

WHOSE  GRAVES WE DESTROYED

THEIR GLORY SHALL NOT BE BLOTTED OUT 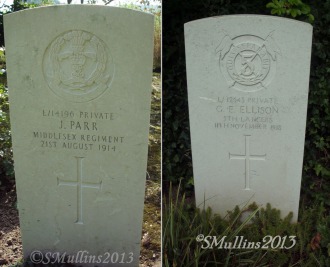 The Beginning and the End

St. Symphorien cemetery was established by the German Army in August 1914 as the final resting place for British and German soldiers who were killed at the Battle of Mons. Brimington soldier George Insley is buried there and despite its significance we found the cemetery quite lovely, serene and unique in its layout.

Memorials>>
Return to top of Page