We’ve attended the 11th November  Armistice Day commemorations in Ypres for many  years.

We’ve been amongst huge crowds some years and  slightly less attendance on others.  It has rained, snowed, and blown  gales  on that day over those years  but it has never dampened peoples dedication to attend the occasion.

As well as the Belgians , we’ve met Canadians, Americans , Australians, and people from all over other parts of  the world in Ypres on that day.  The Sikh community is always prevalent in the crowds.

In the  years leading up to  the Centenary  of the Great War,  security at the Menin Gate became  very tight  due to attending VIP’s– so  from very early morning there is no access through the gate into the town.   So for those on foot its a long trek  around the outskirts to get in. 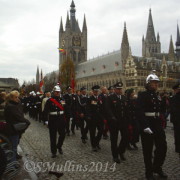 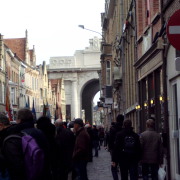 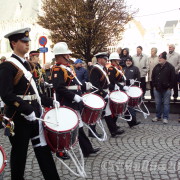 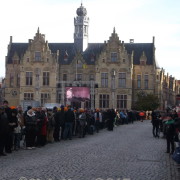 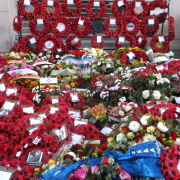 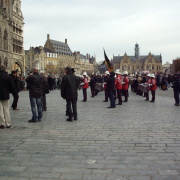 Anyone can join the  parade which begins to line up outside St Georges Memorial Church after the morning service there.   There are generally a number of bands in the line up of many nationalities.  As well as representatives for all kinds of organisations and associations.

The parade sets off around 10.15 am  and makes its way through the streets , passed the Cloth Hall  towards the Menin Gate.    Crowds line the pavements and are generally packed tight all the way down Menenstraat to the Menin Gate itself.  So  in recent years huge projection  screens have been set up in the Grote Markt  so everyone can see the ceremony live. 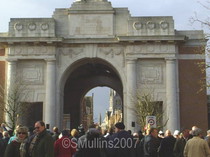 Crowds at the Menin Gate

The Service of Remembrance

The service is of course solemn and emotional,   Scottish Bagpipers are regular contributors and there is nothing quite like the lament of the pipes to bring a lump to the throat.  There are prayers and hymns and speeches – in both English and Flemish.  And official wreaths are laid.

And at 11am on the 11th day of the 11th month,  there is a minute’s silence  as thousands of poppy petals are released from the roof of the Menin Gate. It is an occasion which everyone should experience if only for this one incredible  moment.

The Last Post is played by the buglers of the ‘Last Post Association’ and  the ceremony comes to end. 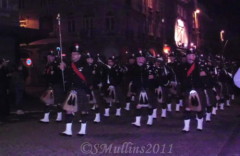 Every evening since 1928 * the Last Post had been played under the Menin Gate at 8 o’clock and  Armistice Day is no exception – although the crowd and the parade  is usually much larger.

A few years ago the Grote Markt  area would be full of visitors and locals alike, taking advantage of the splendid array of restaurants and bars around the square whilst they waited for the Last Post ceremony.  The Scots were always there in force, entertaining the crowds with bagpipes and highland flings.

The evening has toned down a little recently, but it none the less an incredible occasion to witness and to be a part of. 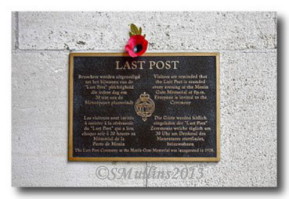 The Cloth Hall,Ypres
Centennial>>
Return to top of Page