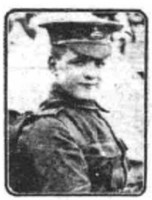 Horace Fred Stott answered the call to arms in March 1915 - when he was barely 16 years old, and like many eager young boys of his time, he lied about his age to the recruiting officer. Horace’s father however refused to allow his underage son to sign up, so he dragged him back home.

Two weeks later Horace, determined to do his ‘bit for King and Country’ ran off to enlist again and this time succeeded in joining the 6th Bn Lincolnshire Regiment. He completed his basic training in Witley in the south of England and on the 31st May 1915 he would have lined up with the rest of the brigade to be inspected by King George V who visited the troops on Hankley Common, Surrey. Then on 12th June 1915 his battalion, now part of the 33rd Brigade received orders to prepare for service at Gallipoli. 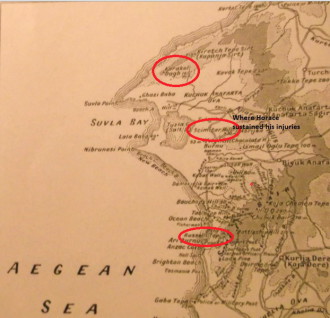 Horace and his comrades left from Liverpool on 30th June 1915 sailing on either the Aquitania or the Empress of Britain bound for the Mediterranean island of Mudros near the Gallipoli peninsula. After a brief stop in Alexandria (Egypt) they finally landed at Sulva Bay on 7th August 1915. Horace and his comrades went through fierce fighting throughout August & September at Karakol Dagh, Russell’s Top, and the infamous Battle of Scimitar Hill. And it was there in October 1915 that Horace was  seriously wounded in the head.

He was removed from the battlefield and shipped to a hospital station in Alexandria, Egypt, to await transportation home, and it was from there that his parents learned of their son’s terrible injuries. There is a brief article in the Derbyshire Times   (November 1915) reporting that      ‘Mr F Stott of Station Rd Brimington has received a telegram stating his son Horace is dangerously wounded and is at Alexandria’

Sometime in December that year Horace arrived in Wandsworth Military Hospital in London. His mother who was heavily pregnant with Horace’s brother at the time – a brother who was to be born after Horace’s death – could not make the long uncomfortable journey from Derbyshire to London, but his father travelled to see his son.

It was noted that the severely injured Horace called out repeatedly for his mother, but at least his father was able to see him one last time. On 13th January 1916, seventeen year old Horace Fred Stott died of his injuries in Wandsworth Hospital and shortly afterwards his body was brought home for burial in Brimington cemetery.

He was given full military honours, and surrounded by his distraught family and comrades he was laid to rest in a military grave, bearing the proud insignia of the Lincolnshire Regiment. Horace’s story is just one in the millions upon millions of others from The Great War. 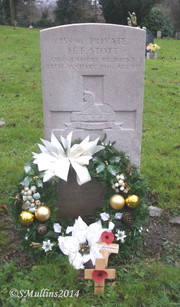 Another wasted life. Another insignificant statistic of the terrible useless carnage. A name, long forgotten, roughly etched on a brass plaque on barely noticed Memorial Gates. A name that is read out on one sad day a year- Remembrance Day – by an official who does not even know the first name or identity of that name amongst 119 others.

But young Horace is different; he has never been forgotten even though his immediate family are now all gone. Because every year for the last 90+ years after his tragic death, a Christmas wreath has been laid on his grave. Never once has the homage been forgotten by subsequent members of his wider family.

His father Fred died in 1926; just ten years after his beloved son had been so senselessly taken. And he lies with his son in the same grave. His own name cannot be remembered on the grave stone as it is a military grave.

Horace’s mother, Eliza died on 17th May 1950 and another brother Wilfred – bed-ridden for the last 25 years of his life with Rheumatoid Arthritis, followed her to the grave just two weeks later, and they are buried together in Brimington Cemetery just up the hill from Horace’s last resting place.

His youngest brother, Ron, who was born a month after Horace died, grew up knowing of his soldier brothers sacrifice because Horace was always talked about in the family and so his memory was kept alive. Once both his parents had died Ron ensured that the Christmas wreath was always laid on his brother’s grave.

And even after Ron’s death some 20+ years ago the pilgrimage did not cease for his wife Grace took up the mantle, and even though she lives in Nottingham she makes sure a relative from Whittington places the wreath each year in her absence. And we have pledged to Grace that we will ensure the ritual carry’s on for as long as we are able. 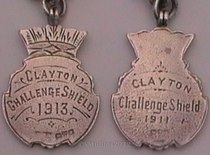 It’s from Grace that we’ve learnt a lot about young Horace before he went off to war and lost his life. He worked at Sheepbridge; he loved his mother’s meat and potato pies. And he was a keen footballer,- a prolific goal-scorer in the Schools Boys team.

He was a member of the Brimington school boy team who won the famousClayton Challenge Shield in 1913 and who were runners up in the 1911 competition.

And it is our privilege and with overwhelming pride that we are now the proud custodians of both his football medals, recently passed into our safe keeping by Grace. 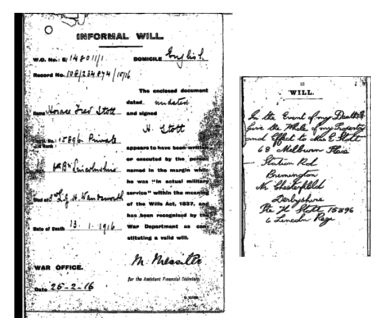 We've recently obtained a copy of Horace’s 'Will' - a requirement of all British soldiers at the time -and he leaves all  of his property and effects to his mother, Eliza.

This is the first time we've seen Horace’s handwriting and signature, needless to say it brought a lump to the throat.

Shot at Dawn>>
Return to top of Page